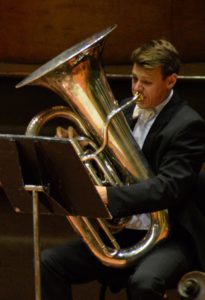 John is an experienced performer and teacher of brass and holds a BA (Hons) degree in music performance from the Royal Northern College of Music. Before returning to the Isle of Man, where he grew up, John held the position of Principal Tuba with the KZN Philharmonic Orchestra; South Africa’s leading professional symphony orchestra.

A passionate educator, John has taught internationally at institutions such as the Royal Academy of Music Junior School, Dulwich College International School of Beijing and China Central Conservatory of Music and has presented workshops and masterclasses for pBone and Denis Wick. He is currently the teacher of brass at King William’s College, The Buchan School and for the Isle of Man Music Service where he also conducts the Manx Youth Concert Band.